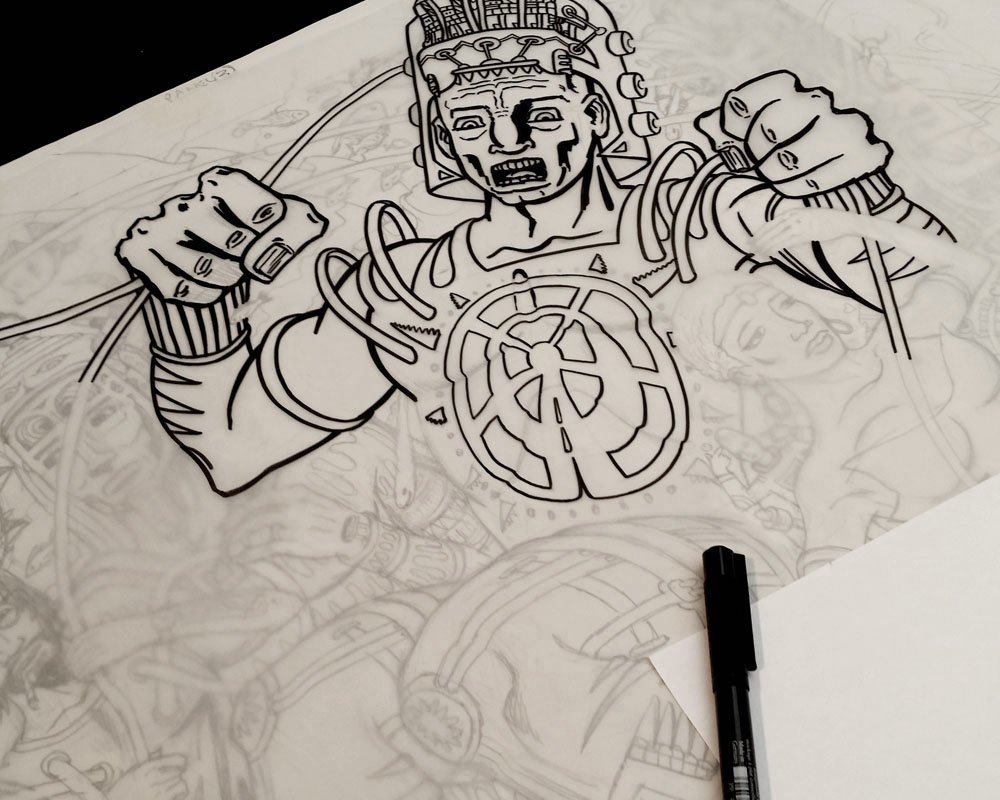 This interview originally appeared on the Organic Beats Website, and was written by Alexander Foy at One.Seventy. Check out their events – visit: https://facebook.com/One.Seventy.LND

How many iconic pieces of music are intrinsically linked to an image or design? We explore the artwork of Angus Day, and his work for Phuture-T’s ‘The Fugitive Drummer’.

Record sleeve art can be traced back to 1938 when Columbia Records employed Alex Steinweiss as its first ever Art Director. He is credited with inventing the concept of record cover and sleeve art. Back in October Inperspective Records released ‘The Fugitive Drummer’, a kaleidoscopic crescendo of jungle breaks pastiched together echoing the form of a 70s funk band. An extraordinary release that required a fitting package to equal the musical content. A full art gatefold experience. 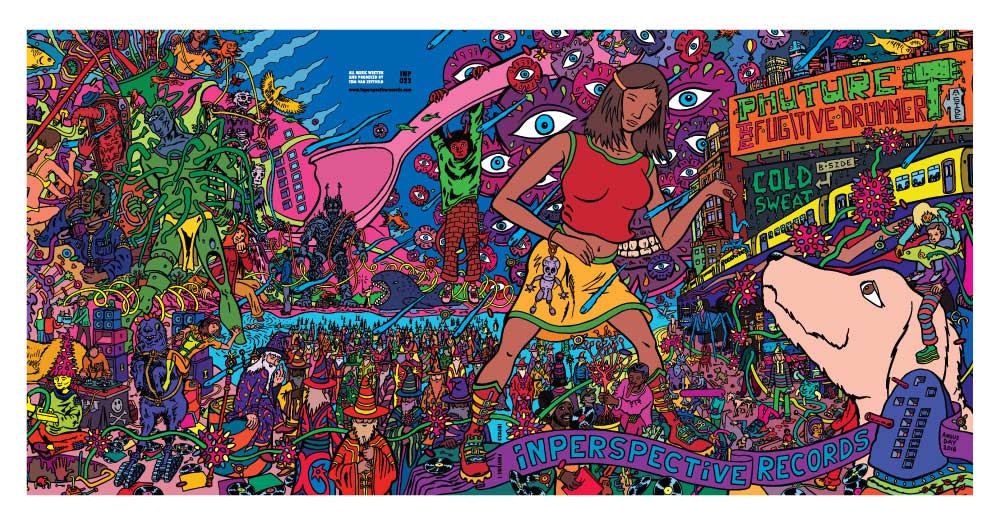 Enter Angus Day, artist and graphic designer who’s own life is interwoven with the story of Jungle Drum & Bass.

“One day, Chris (Inperspective) and I were chatting about comics and I sent him a couple of sketches for characters he had come up with. Later he asked me to do the artwork for the Phuture-T release and he wanted to go full colour on this one.”

Angus’ work employs a mix of hand drawn images which are later worked on digitally. While the work has a clean defined finish, it still retains a spontaneity and flow that comes from the human touch. The finished artwork for ‘The Fugitive Drummer’ flows like a conscious dream, scene to scene while the track plays over in your mind. Think Roger Dean for the Jungle era.

“I used pencil on paper at about twice the size, in four panels. Then hand inked on tracing paper with brush pens. Scanned, assembled and coloured on computer as one image which had been designed as one continuous never-ending loop around the record sleeve.” 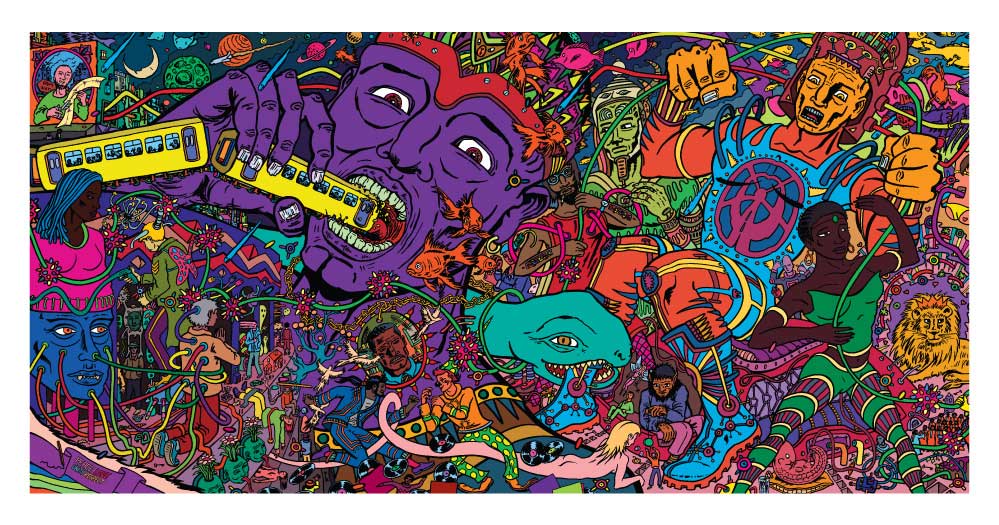 As a viewer, the work is initially overwhelming. Where do you start? As your eyes pan across the work you find yourself drawn to the individual stories and characters that make up the visual ensemble. A wolf boy, tamed beasts, wild humanoid characters, flying eyes, a surreal Pharaoh, and a continuous peppering of different sea life that patrols the whole piece. The work keeps on giving, you could spend hours exploring and keep finding more.

“Chris said he wanted a full gatefold like the old prog rock covers of the 70s. Having lived through the 70s, the music and art of the Prog Rock albums of the time were a huge early influence on me, so I knew exactly what he meant when he said: “You know, like a sea of wizards or something”. I thought it would be funny to put an actual sea of wizards in. It was to be a kind of ‘Where’s Wally,’ except it would be ‘Where’s The Fugitive Drummer?’ Chris said to just go mad on it so I did what comes naturally and started listening and drawing.” 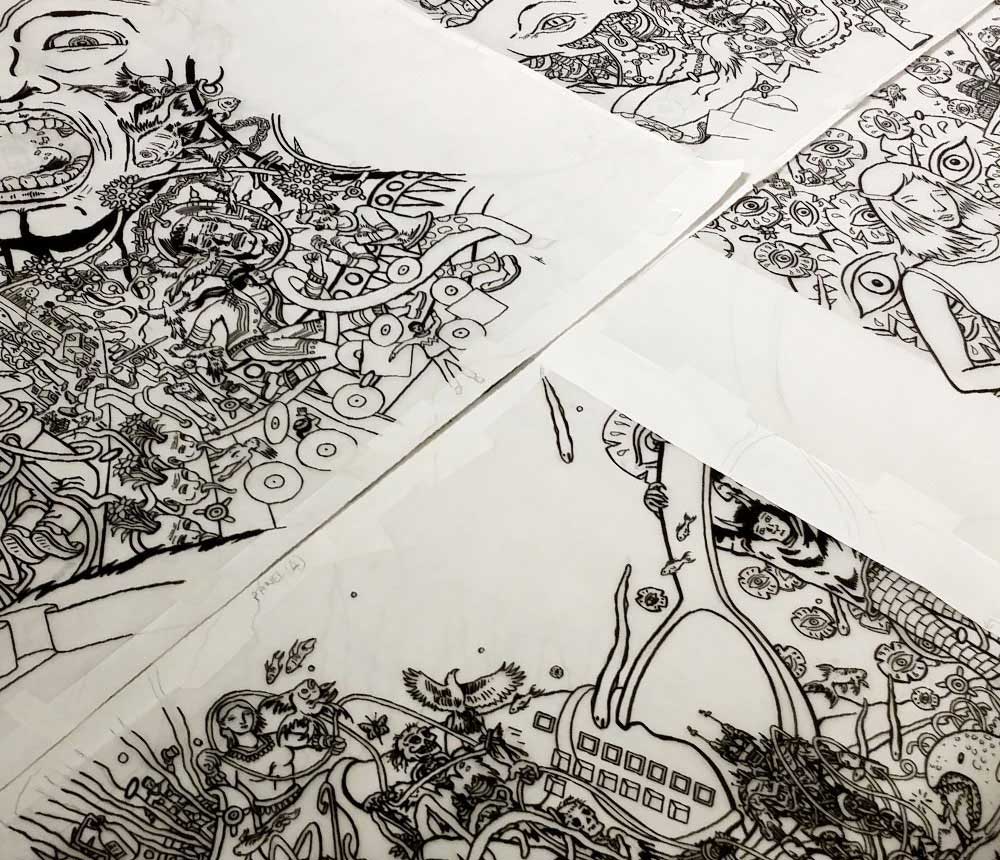 Historically, Inperspective Records has been a wholly monochromatic affair, leaning towards stark, metallic tones. Angus Day’s work is conceptually the antithesis to the previous bringing a warmth and vibrancy to the labels visual identity. The work calls on the history of rave, its parallel link to psychedelia and art motifs that permeate back in time to the 1970s.

“Listening to Tom’s (Phuture-T) tracks took me back to the early days of jungle Drum & Bass at places like Laserdrome, Paradise Club and Bagleys. In your face and heavy but colourful and fun. I wanted to do a non-stop mashup that had the feeling of those crazy all-nighters. It was going to take some time to complete, so I just drew unplanned until I had filled the paper, with no preliminary sketches. As I drew, I added in people who had been a part of my own jungle journey and there is even my cat in there somewhere. I also added in puzzles such as What break is Phuture-T chopping? Plus on the labels there’s an anagram of someone who has helped shape the look of the UK rave scene. And of course the fugitive drummer is hiding in there somewhere!”

Phuture-T ‘The Fugitive Drummer’ / ‘Cold Sweat’ is out now on Inperspective Records. Buy it at: https://inperspectiverecords.bandcamp.com/album/inp023-fugitive-drummer-cold-sweat

You have Successfully Subscribed!