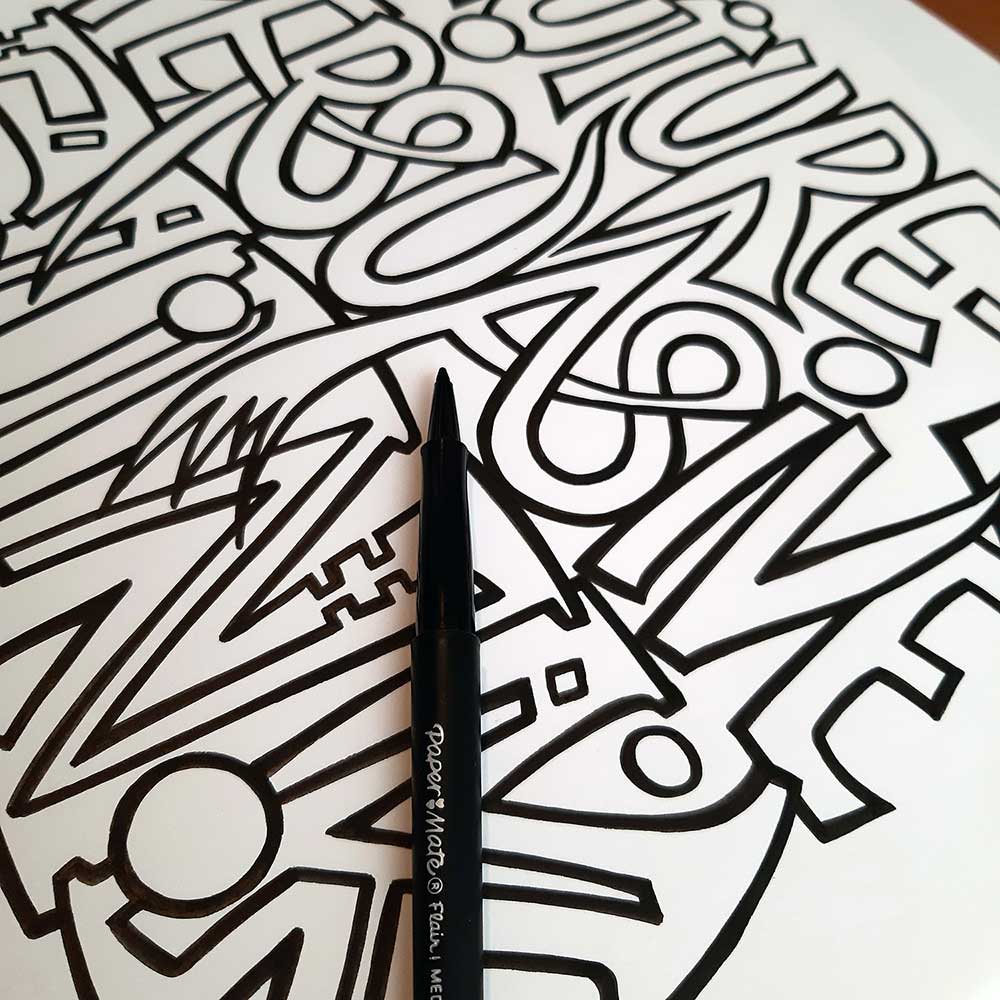 When Inperspective Records released Phuture-T’s “Persuasive Funk LP” I was interviewed about the artwork that I produced for it.

In what way does the ‘Persuasive Funk’ music relate to or inspire the artwork?

I played Tom Phuture-T’s ‘Persuasive Funk’ LP as I drew, to help the fun and funky spirit of his album permeate my art and due to the jazzy improvised nature of the album I decided to use abstract shapes and doodles but to make them work within a 3D landscape setting.

The Inperspective Records name and sculptured logo on the the outside cover shows which label contains the music, but as you open up the gatefold sleeve, I wanted the imagery to reflect the musical landscape revealed throughout Tom’s album. 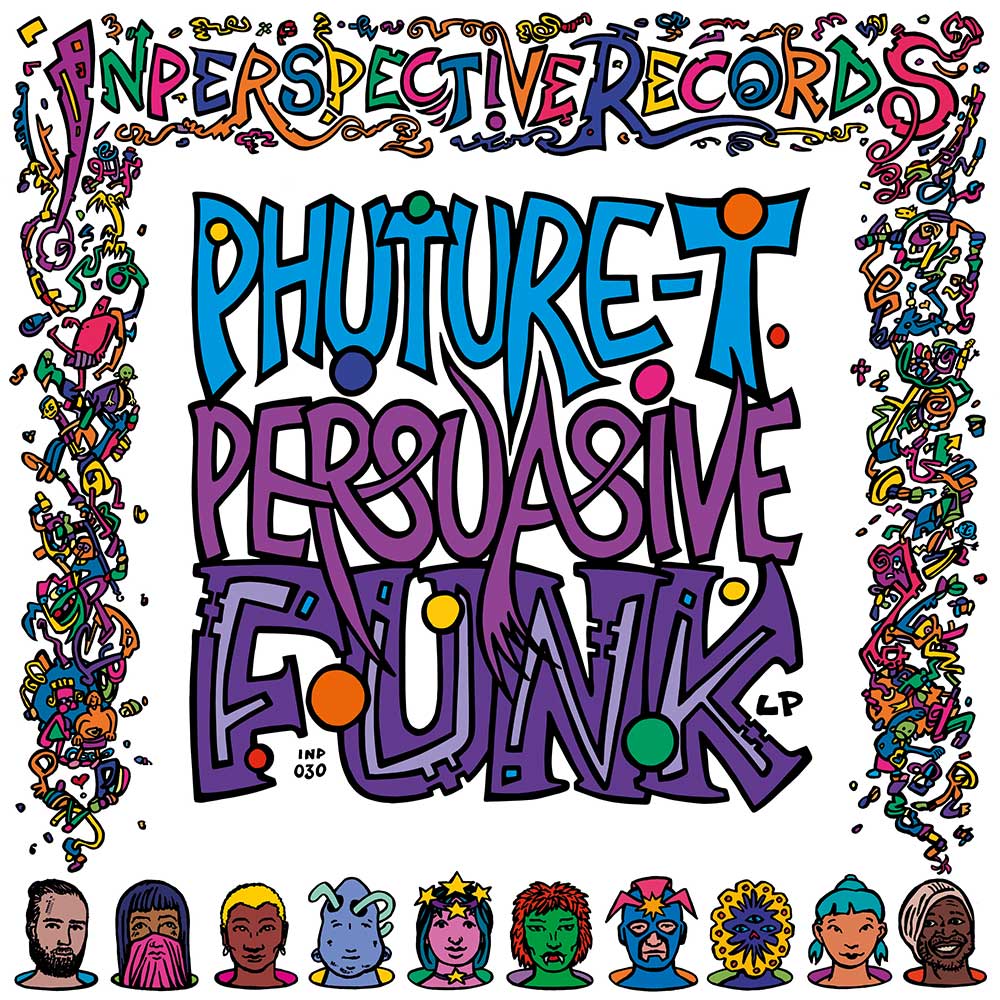 Tom had an idea that he wanted to merge his two favourite locations – his own music studio and ancient temples. He also gave me a list of other things that he loves in life, such as instruments, speaker stacks, beer and his two cats, which I included to make the art personal for him.

So as I drew the gatefold inside spread, I incorporated the layout of Tom’s studio, including his acoustic treatment panels, his computer, midi keyboard, reel-to-reel, mixing desk, and of course, his beloved cats sitting on top of his monitor speakers.

Tom had collaborated with some fantastic musicians on many of the tracks, so instead of the usual temple head statues, I decided to create a conveyor of characters slowing being subsumed into the studio and converted into his music.

And finally as you delve deeper, and take out the vinyl to play, the inner sleeve art brings to light the mad experimental aspects that makes Tom’s music so satisfyingly junglistic!

Would you be able to describe the process behind creating the ‘Persuasive Funk’ album art?

Having created the artwork for Phuture-T’s The Fugitive Drummer/Cold Sweat release, I was very happy to be asked again. Although Chris gave me free rein with the visuals, he had sent me a blank template, which had potentially 11 sides of artwork and a cut out window that was tricky to work around, but I think the challenge helped produce something a bit different this time.

And like the last release, all the art and lettering is completely hand drawn with a simple HB pencil on paper. I drew each side exactly as you see them, as it helped me get a grip on the layouts. I started with looser sketching and then built up the details, refined angles and looked to balance the composition. 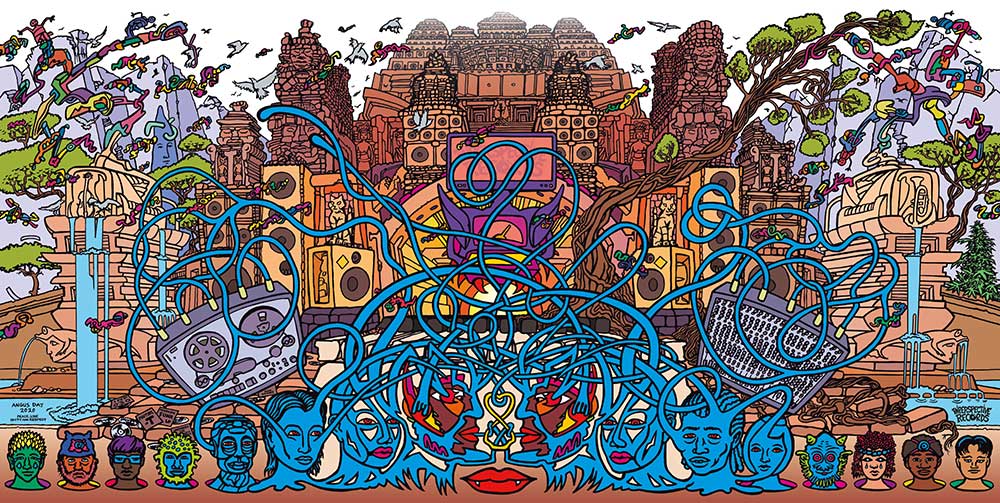 The sides were too large to easily trace onto a decent paper with my trusty lightbox, so I used tracing paper so I could ink each side in one go to keep the flow. I actually ended up using a cheap pen from the supermarket, as my fancier brush pens were struggling to show up on the tracing paper, so I had to go over every line a few times to get varying thicknesses.

Having no access to a large format scanner due to lockdown, I had to chop the whole thing up into small pieces in order to scan with an A4 desktop scanner – and then I reassembled it all again in the computer. I guess that is fitting though, considering how much choppage there is in Tom’s music!

Finally, I coloured the artwork where needed in Adobe Photoshop and prepared printable layouts with Adobe InDesign ready to go into production.

What are some of your biggest inspirations on your work more generally?

As a kid I would try to get hold of available comics when I could, which were mostly cheaply printed black and white American and British comics like 2000AD.

The amazing line and shadow work they contained were a massive influence on me – prompting me to draw and make comics from a very early age. In fact my teacher at junior school wrote in my report: “Angus’ art can be quite good in cartoon form, but otherwise he lacks artistic flair.” (!)

Comic art is pitifully undervalued, but to my eyes, is some of the most accomplished art, both technically and expressively – it has to tell a believable story, have graphic impact and feature engaging characters and settings that need to be consistently drawn from all angles, in all situations, from a suburban kitchen to an alien space station. And that’s on top of anatomy, perspective and composition!

I love comic artists like Jack Kirby and Chris Ware for their bold compositions, Kevin O’Neill and Carlos Ezquerra for their texture and detail, Gene Colan and Frank Miller for their shadows and atmosphere, Ian Gibson and Craig Thompson for the sheer beauty of their line work and then there’s Gilbert Shelton, Bill Sienkiewicz, Ken Reid, and Leo Baxendale who explore the ugly and the surreal. 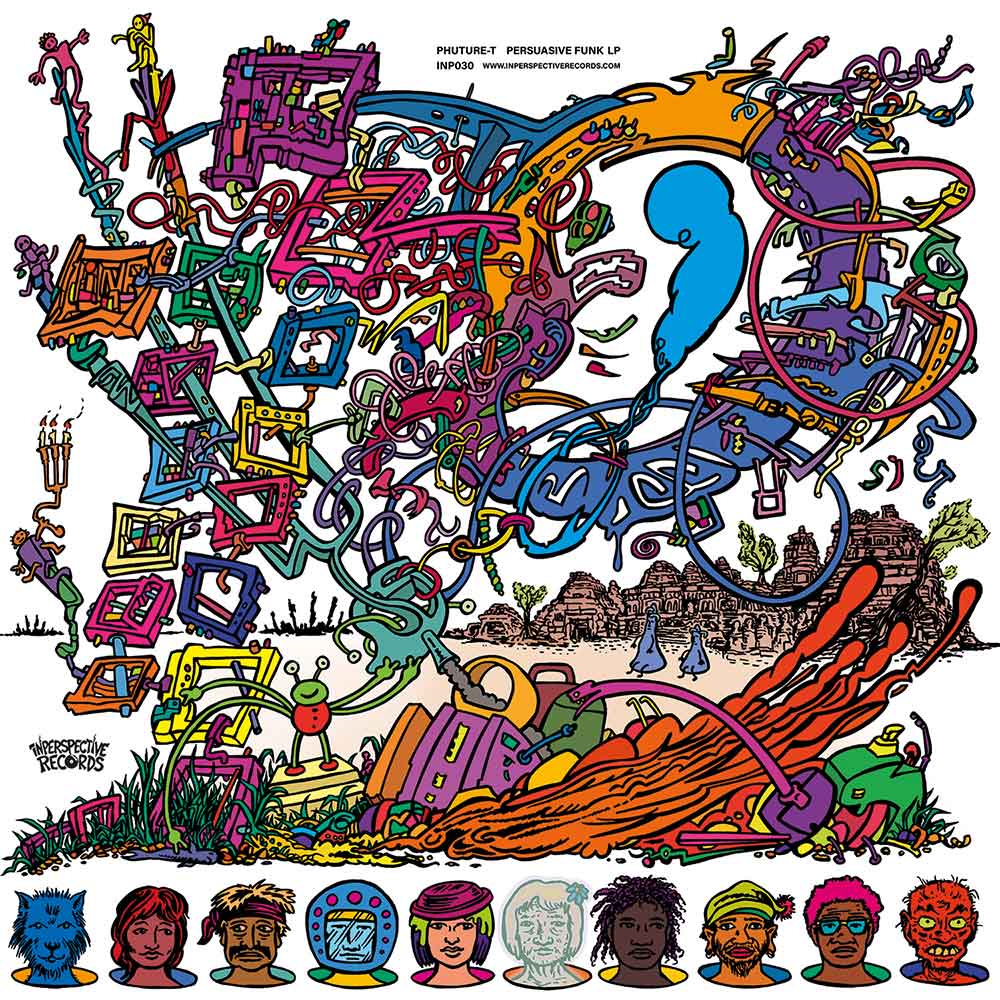 I do get inspired by everything I see, though – from Hand drawn prog rock and death metal record covers to artworks by David Hockney, Max Ernst, Sandro Botticelli, Larry Rivers or Claes Oldenburg – and I always feel especially inspired when collaborating with other artists. I have always been encouraged by my family and friends old and new to keep creating, so I am truly thankful and continually inspired by them – You know who you are!

Have you always created work in this style and how has your style developed?

You’ll see from my website that I usually don’t stick to a certain style, although people say that they can tell an artwork is by me somehow. Decades of graphic design and illustration for high street brands has meant I have always tackled various styles and subjects.

But Chris Inperspective has always encouraged a more experimental and personal art approach on his label – so who knows what we’ll see next – I hope I am always changing, trying new things, although I will always love a good pen and ink drawing as much as I love good Jungle music! 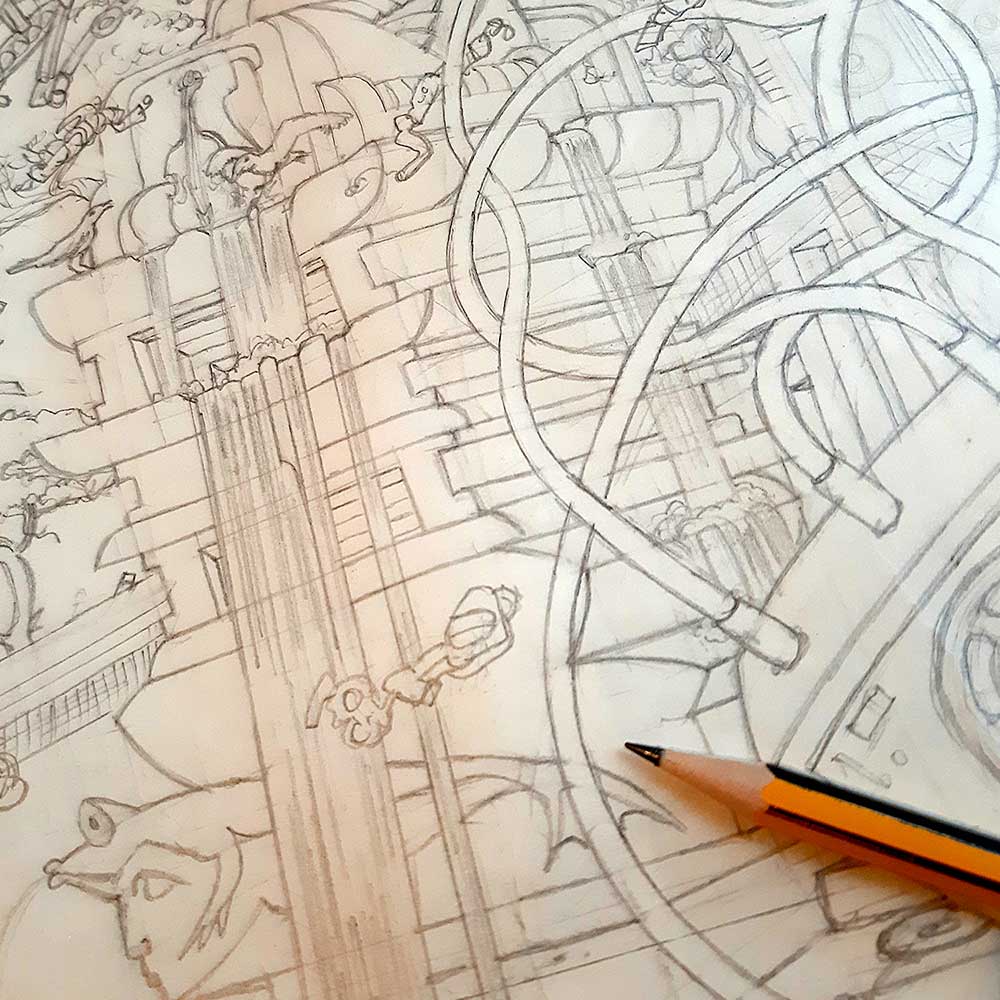 For the last 15 years I have been painting more seriously and have had to learn how to physically handle acrylic paint on canvas. I can have lots on the go at the same time, and they can take many years of layering and scraping with knives and brushes, building up slowly until they are ready. It’s a very different approach to drawing, as it is more about the colour and texture than the line and shape, but it can still be hard, detailed work and needs much patience and determination to finish!

As for the future, I want to continue smashing techniques, ideas and subjects together – uncensored and unplanned – as I am never sure how the art will turn out, so it’s more of a surprise for me too. I value a doodled cartoon bug as much as complex architecture and love that they can coexist in my art. I also need to draw faster as it can be a race against time before my cat tries to sit on my drawing and hunt my pencil!

I’d like to give big thanks to Inperspective Records for the opportunity and for all the positive comments I have received from people about the Phuture-T artwork. It really means a lot to me. There is so much more to learn and explore and I hope I get to do more artwork for Junglists – as it’s a way I can give back to the music that has been my favourite soundtrack for the last 30 years.

You have Successfully Subscribed!